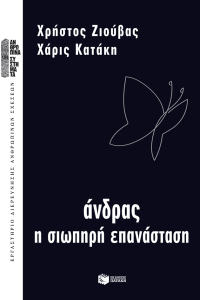 The processes of male identity transformation, which recently accelerated dramatically revealing an unknown, more private side of men, are becoming increasingly visible in personal, family and wider socio-cultural contexts, and are already reflected in the structure and functioning of the family,  in the couple’s relationship, and in professional and social settings.

Man: The Silent Revolution traces the emerging, new masculine identity through multiple perspectives. The authors follow modern man on an unprecedented course, hitherto unimaginable within traditional representations of masculinity, as he quietly removes his armour and challenges the one-dimensional image he held of himself and others of him. Having abandoned his archetypal hegemonic position, he finds himself standing at an existential crossroads where he revisits many deep-rooted elements of his traditional self. 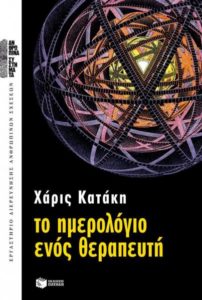 Diary of a Therapist

The publication of the Diary of a Therapist coincides with the 30th anniversary of the Laboratory for the Study of Human Relations, founded by Charis Katakis in 1984. In the Diary, the author invites the reader on an extraordinary journey through hidden aspects of a therapist’s life and reveals the most fundamental ingredients that over the years have shaped her unique approach to therapy. Among other things, the reader will discover the importance of getting to know and maintaining ties with our genealogical and cultural roots, enabling us to join the dots of our life and find our deeper self. Along with the author, the reader will revisit important landmarks in their life’s trajectory, when called upon to decide on a career path, on marriage and direction in life, and will reflect upon the often tragic ambiguity and double meaning of our everyday language, when we say one thing but mean another.

Just a few steps away from the landmark year 2000, equipped with a truth that places responsibility for the future in our hands, we realize that there are no fixed, a priori objective truths that govern our destiny; only the alternating and eternally revisited perceptions and beliefs that we ourselves construct, reject and construct again through our lived experience. The agonizing search slowly comes to a standstill as we begin to sense that familiar paths do not hold the map and compass we are desperately looking for. We begin to sense that problems and symptoms – physical, social and psychological- are not the result of personal weaknesses, mishaps or situational hurdles, but are part and parcel of the ambiguity that prevails around us. We sense that it is now a matter of survival to find a way to cultivate and nurture our inner self, to understand what is going on inside and around us so that we lead balanced, satisfying and above all, meaningful lives. 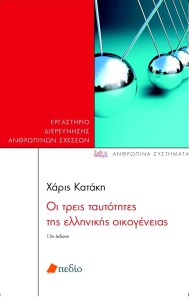 The Three Identities of the Greek Family

This book is an attempt to construe the chaotic web of family interactions as the clash between conflicting models of life ideals that get tangled inside us as our societies are propelled from a traditional to the postmodern era.

From the book’s first edition:

“From a widespread feeling of dead-end, we seem to be entering a period of seeking solutions and alternatives. Amid the turmoil of the last few decades that shook the very foundations of Greek society, the family seemed like a building on the brink of collapse. We were beginning to fear that our modern urbanized consumerist society would have to be built on the rubble of family relationships. Yet in the thick of the chaos and confusion brought by the successive demolitions carried out in the service of prosperity, we underestimated the resilience, stability, adaptability and flexibility of the family, which, as it has done during past crises, would once again, act as a safety net. ” 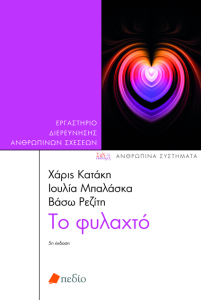 Life’s troubles have landed five women, five heroines, in the same therapy group. Sofia is 50 years old and divorcing her husband because he had an affair with another woman. Evaggelia is 44 and worried about her son; he’s aggressive, he’s moody, he steals stuff and who knows what else he’s up to. Zoe, 34, can’t bear to face her husband and her failing marriage. Despina, 38, is separated and trying to get on with life, she and her son. Last to appear on the scene is Artemis. She’s 35, highly educated, professionally successful, financially independent. And alone.

The Amulet is a book destined to reach completion in the soul of its readers, in the emotions and thoughts that surface as they read, in the whispered repetitions of words and phrases from the book, as they try to grasp and hold on to them. May these words, phrases and emotions begin to form the reader’s personal amulet; that which is worn against the skin, right above the heart. 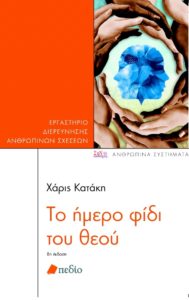 The Tame Serpent of God

With this book, Charis Katakis engages in one of her most creative endeavours, transforming her unique approach to therapy into a novel. Just like those who sit in therapy, readers discover that the author’s integrative systemic therapy model is deeply relevant and suited to the challenges and fluidity of modern life, where we struggle with questions about our identity, our life’s direction and meaning. Like God’s tame serpent, readers realise, in real time, that they too can shed the old skin and start afresh. 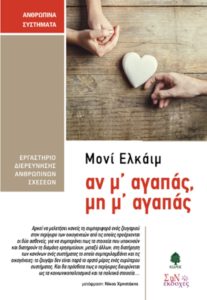 If you love me, don’t love me

Brought to life by Mony Elkaim’s expertise and coloured by numerous clinical examples, this book sets systemic therapy on an exciting course of renewal. Based on H. Foerster’s studies on Second-order cybernetics and I. Prigogine’s work on Non-equilibrium systems, Mony Elkaim focuses not just on the way a therapist is located at the centre of a therapeutic system, but also on the resonances and synergies that the system itself produces. The therapist’s intervention is not limited to uncovering the one truth underpinning the system or its members, but to extending the family’s field of possibilities. Thus, therapy is not a process that unfolds in the centre of a single, isolated universe, but at the intersection where the world maps of diverse individuals meet. 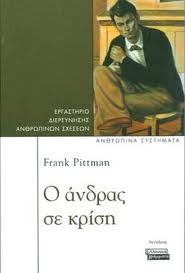 In Man Enough, psychiatrist and family therapist Frank Pittman, with his down-to-earth optimism and frequent doses of humour, highlights a series of contradictions in contemporary representations of masculinity.  He skilfully weaves together theory, observations from his clinical practice and anecdotes from his personal life, to capture the emerging elements that compose modern man’s search for a new identity. 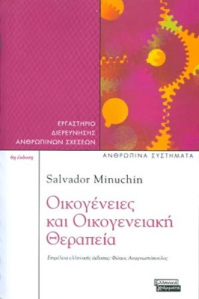 Families and Family Therapy is arguably the most important work in the field of family therapy. It is a landmark textbook, an invaluable tool for teachers of family therapy theory and practice, but also for students training in family therapy; a highly rewarding book on many levels. In this easy to read and fascinating book, Salvador Minuchin creatively brings together the most complex theoretical approaches and presents them in a simple and direct way with the help of multiple examples. As the critic Robert A. Ravich pointed out, this work is a milestone in the field of family therapy and will perhaps remain so for another generation. 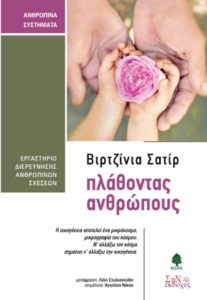 “You need to realize that the way you grew up and your world was shaped, you couldn’t have acted differently” highlights Virginia Satir in this valuable book where she teaches understanding and compassion towards one’s self and others. Such is her care and commitment to the family and to human relationships that, while condensing the expertise and wisdom accumulated over four decades of work and research in the field of family therapy, her writing is simple and light. From its very first edition, Peoplemaking sold over 700.000 copies and was translated into 12 languages, including Japanese, Chinese and Braille. In this book, world-renowned authority on psychotherapy Virginia Satir, addresses key themes in individual development, relationships and the life cycle, including Self-Esteem, Communication (devoting three chapters), Your Rules of Life and others. 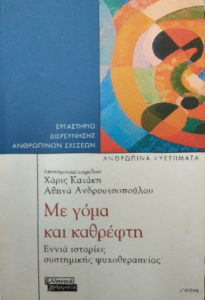 With an eraser and a mirror

…I think of how lucky we therapists are. We meet people and talk about us, about all of us; About existence, life, death, joy and fear. We live in a perpetual process of initiation, where therapist and client are called upon to actively engage in understanding themselves and others, and thus walk down the path of deep, moral self-awareness…

Nine systemic psychotherapists lay out the ways in which they helped families and individuals cope with their issues to lead fulfilling and meaningful lives. Their accounts are a valuable, first-hand record of the transformative process of therapy, and their attention encompasses the therapist as well as the client, and of course, the relationship between them. 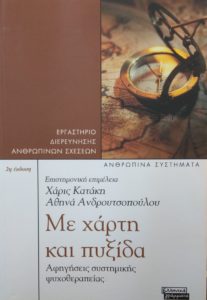 With a map and a compass

As the natural sequel of the volume With an Eraser and a Mirror, the book picks up the narrative thread where the previous left off and continues to recount real stories of systemic psychotherapy. Its themes are conveyed in a direct, authentic and simple manner and touch upon very contemporary concerns: new family structures in the postmodern era, intergenerational reverberations of violence and trauma, family therapy and substance abuse, psychotherapy and spirituality, court-ordered psychotherapy… An important book that highlights the difficulties and concerns of both clients and therapists as they embark on a therapeutic relationship. 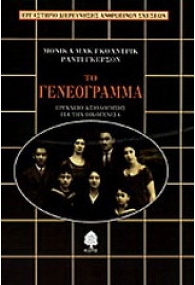 Genograms record personal narratives, complex interplays, conflicts, alliances, secrets, intergenerational patterns and other information about a family unit, and as such are not only a useful and practical tool for therapists and mental health practitioners, but also for professionals in the field of social anthropology and sociology.